Parks are usually not associated with medieval towns. Well, Park Grič is a wonderful exception - a green oasis within the medieval part of Zagreb.

Let’s start with its name. The word Grič is deeply rooted in the sense of place, as it is also the name of the hill where the Upper Town was built. Also, some famous local poems and novels mention the name Grič, plus the iconic Grič cannon marks noon each day.

Sense of place. I honestly believe that is the perfect description of Park Grič - the park reflects the true sense of Zagreb. It is situated at the end of the old town, off the beaten path. Upon the hill with lovely vistas. Layered with history. Once you settle down on a bench for a few minutes, you can feel the spirit of Zagreb. I will admit that this might not be the most objective take on this park. So, why don’t you come over to Park Grič yourself, and then decide whether you agree with me on this?

The city in the distance

I am definitely not exaggerating when I say that the park contains layers of history. It is an archaeological site. Some twenty years ago, I came to the park that was all under excavation. I remember walking on some planks... only to see a bunch of skeletons in the pits under the planks!

Yup, we might owe the serene atmosphere of the park to the fact that it used to be a cemetery. And it still is, in a way, because it has never been fully exhumed.

The skeletons are not the only findings beneath the ground. Archaeologists also discovered the remains of a mysterious palace. It could be the 14th-century royal palace of Croatian and Hungarian king Charles I.

If you look around the park, you will notice the medieval fortification system surrounding it. So many historical layers everywhere you look!

Remnant of the medieval city wall

Speaking of layers...the tallest building that rises above the park is the meteorological institute. Andrija Mohorovičić, a world-known researcher, used to work there. It was precisely in that building where, back in 1910, he discovered a layer between the Earth’s crust and mantle that causes earthquakes. His discovery is called Mohorovičić discontinuity or simply Moho layer. The finding was so important, that Mohorovičić earned himself a crater on the Moon's surface. Go on, look it up, and you will see for yourself - there really is a crater that carries the name of the father of modern seismology.

The institute was built on the location of a former monastery

When I was a kid, the park looked differently. It was adorned with a statue of a little boy which is now on a nearby square. The park looks have just been changed again: Mohorovičić was born 165 years ago - the big anniversary made an opportunity for the park to receive a new ornament, a statue of the scientist. 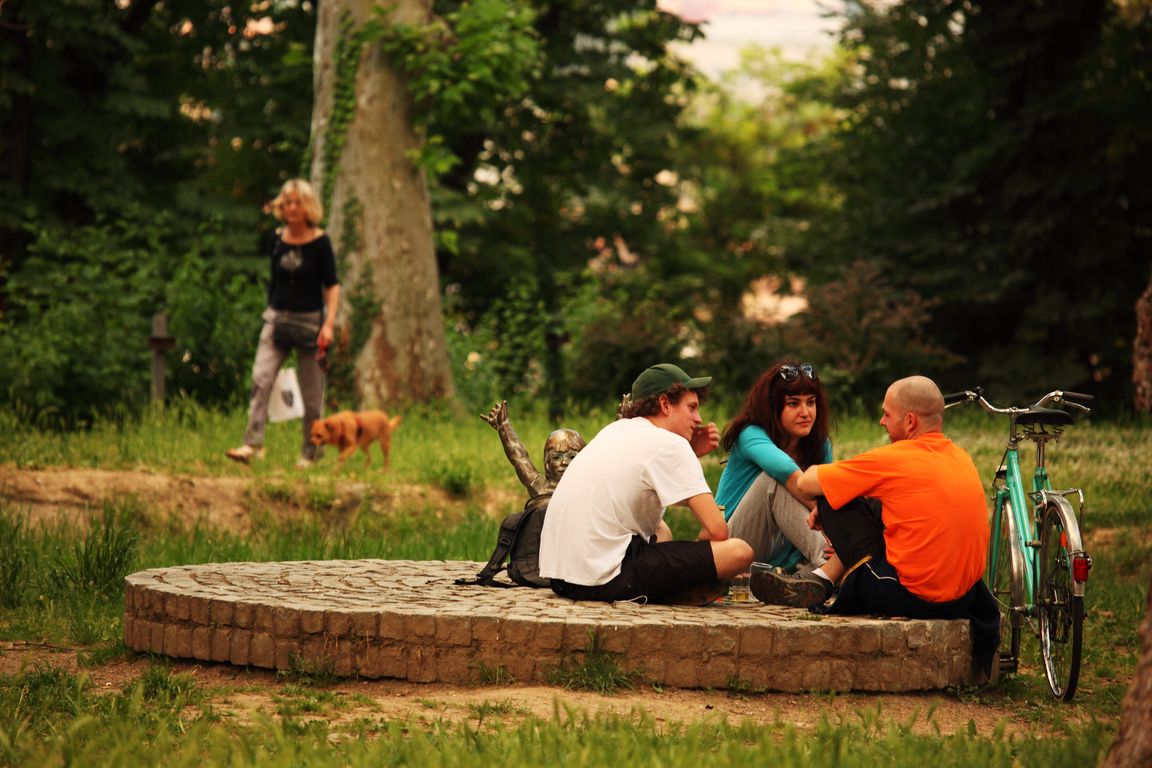 We colloquially call the little boy metalac - heavy metal fan - due to the horns gesture. Photo by M. Vrdoljak for Zagreb Tourist Board

Isn’t it interesting how this tiny park, within the walls of the old town, is continuously changing? In fact, in the past few years, it has won the hearts of Zagrebers back. After being neglected for many years, it is now a vibrant spot again, and it serves as a connecting piece of the big Zagreb puzzle.