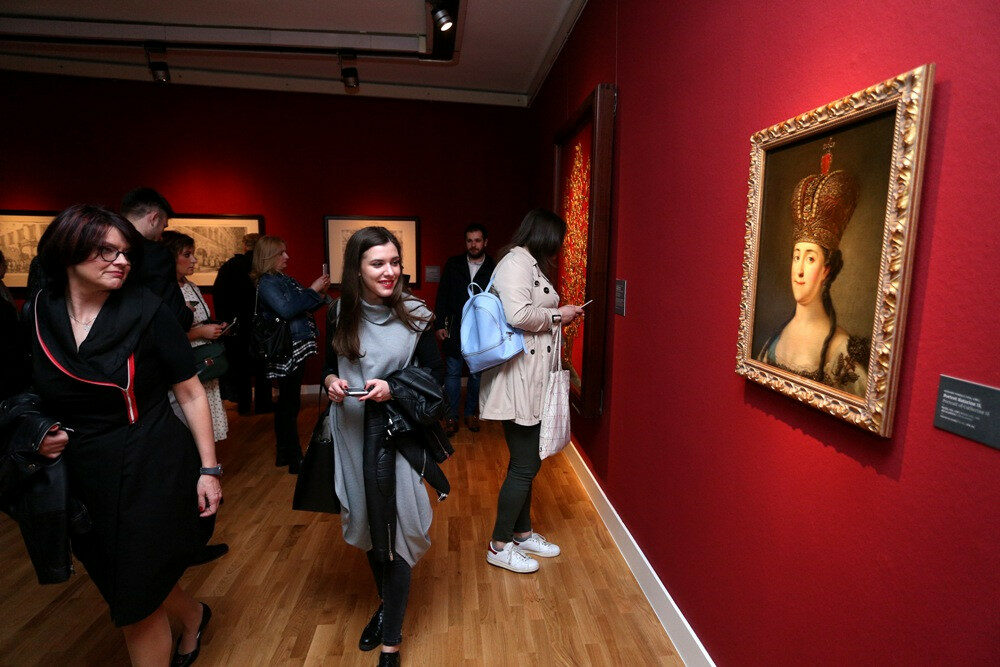 Catherine the Great – the Empress of All Russia: Exhibit from St. Peterburg to Zagreb

The famous rulers of history are often praised and glorified. Sometimes justified, sometimes not so much. The history tells us that Catherine the Great really justified her added name and her reign was considered Russia's Golden Age. This blog is dedicated to the exhibition on Catherine the Great.

Catherine the Great, also known as Catherine II was the Empress of Russia from 1762 until 1796 and she was the country's longest reigning leader. She came to power when her husband, Peter III, was overthrown. Under her reign, Russia was revitalized, it grew larger and stronger, and was recognized as one of the great powers of Europe. All of this, plus the 50th anniversary of friendship between towns St. Peterburg and Zagreb was more than enough for the preparation of the exhibit that is currently being held at Klovićevi dvori, at the Upper town in Zagreb with the exhibits from the museum Ermitaž - one of the biggest museums in the world. I find it important to mention that Catherine was (is) the founder of the museum itself. This is a story about my visit to that exhibit.

The exhibition started on 12th of April and it will last until 29th of July, so there is no real excuse for you not to visit the exhibition if you are interested in history. The exhibition on two floors was conceived especially for the rooms od Klovićevi dvori, and it's meant to give a cross-section of the very special era of Russian history.

It consists of some personal items from her everyday life as well as her life as an empress. In addition to that, the exhibition holds a rich collection of artworks the empress collected during her lifetime because she was a passionate collector. That collection represents some of the most extensive artwork collections in the world.
The interesting thing to mention is that the exhibition offers over 1,000 exhibits so be sure to take your time when going to Klovićevi dvori. In order for a visitor to get a better idea of the whole concept, the exhibition is divided into a couple of sections and themes. The first one "talks" about the museum Ermitaž in general and the rest is dedicated to telling the story about the empress, her life, and her reign.

As I mentioned before, this exhibition is huge with over a thousand displays. Besides Catherine, they are also telling a story about her ancestors, royal family, her significant role in education and enlightenment as well as about foreign affairs and wars she fought. But before all that, the exhibition will provide a clearer picture about the passion the empress had for art which later led her to the founding of Ermitaž. Personally, for me, the most interesting parts of the whole exhibition were the clothes Catherine wore every day and war items she used. They could take me back in time, and they allowed me to imagine a life she was leading. It was surely a life worthy of a true Empress. All of her items (at least the one brought to Zagreb and displayed) were ornamented and pretty suspicious. Even the guns and weapons I saw were flashy and classy. I'm not sure if she or anyone from her army used those but they all look too nice for warfare. The questions in me kept boiling, do they work, are they firing and also, how would Rick Harrison and the gang estimate their value...
On the other hand, the pictures and the sculptures that are also displayed on the exhibition weren't quite my cup of tea. When it comes to art, I'm more of a modern works fan. The ornamented frames and gold sculptures are not quite the thing for me. They are undoubtedly beautiful but not quite for me. There is, of course much more you could say about this extravagant exhibition but I will let you discover some of the curiosities by yourself. I would definitely recommend this exhibition to everyone, even to those who would say history isn't their biggest interest. Empress Catherine was great and the curators surely prepared a great exhibition.