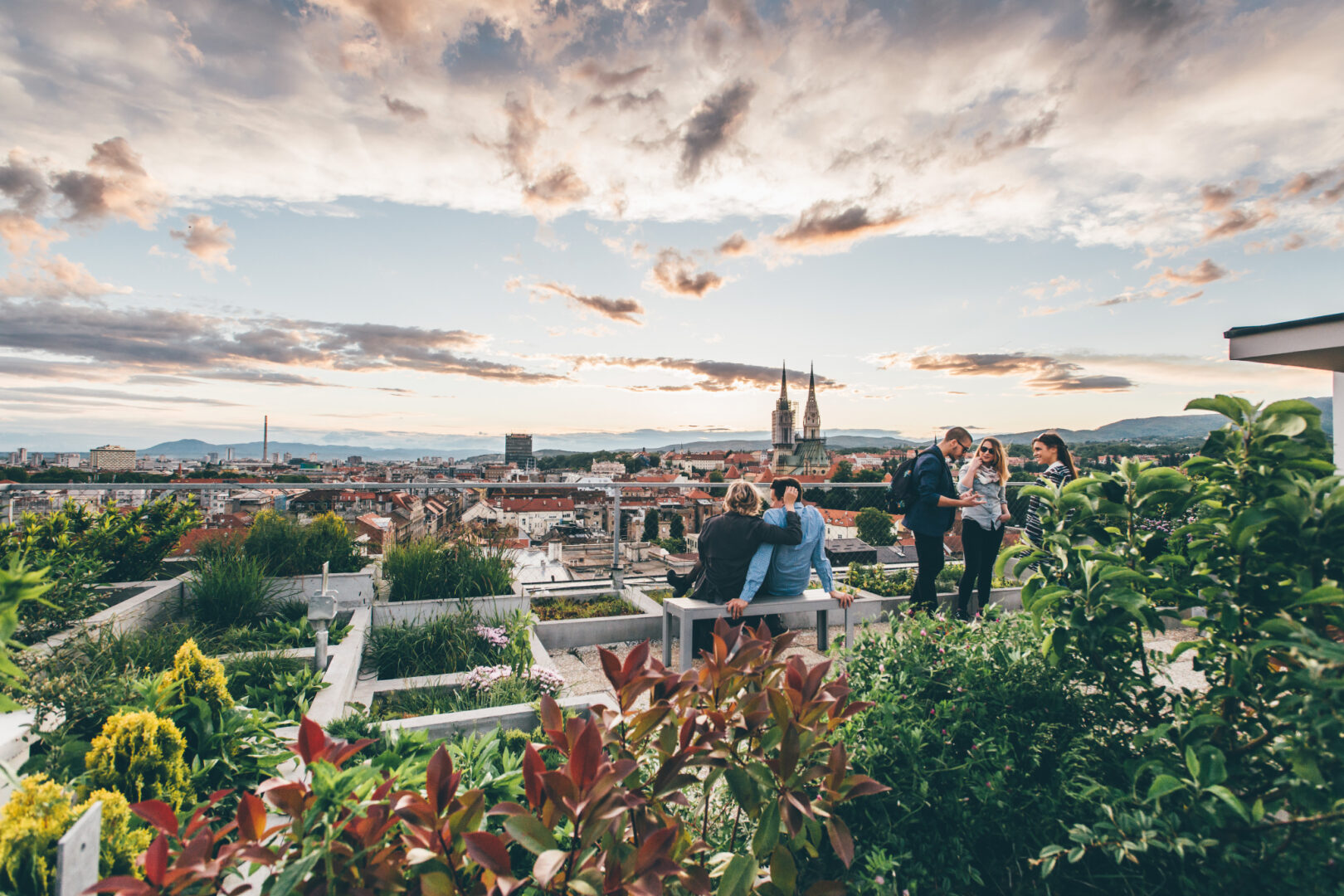 When you think cafe, you probably assume they only serve coffee-based drinks, teas, frappuccinos - something along Starbucks, right? Well, you got it all wrong, honey! Want an alcoholic drink at 11 am? Zagreb has you covered. How about a coffee at midnight? Zagreb has you covered. For more Zagreb fun impressions, read our interview with Diana, an American who just recently moved to the city.

So let's start. Introduce yourself to us. Where are you from, and why did you move to Zagreb?

Hi! My name is Diana! I am originally from sunny San Diego, California. There are two reasons that brought me here to Zagreb - I wish I could say the main reason was to teach English abroad and explore the world, but let’s face it! I moved here because my boyfriend lives here. Yes, because of love! Cheesy, I know!

How hard was it to move to another continent and get used to living in a different country?

Finding a home was surprisingly not too difficult. Through research, I found this Facebook group called Expats in Zagreb. They post plenty of apartments for rent. I was able to connect with a woman who was seeking a couple to rent her apartment for four months, which worked perfectly for us.

As for living in a different country? It is only my third week living here, and sometimes I feel like an alien! Luckily most people here speak some English, so communication isn't too much of an obstacle. But I will often use Google translate when shopping for groceries. Knowing the difference between šećer (sugar) and sol (salt) is quite crucial because they look the same! It really is the little things like reading food labels at the Interspar that can become quite frustrating. What are the most significant differences between your home country and Croatia?

Here are the differences that stick out to me the most by far.

It is very common here for people to travel via tram or bike. I have never seen so many people traveling by bike! Yes, in California, we have bikes and trams, but it is not the #1 method to get to work or school. Bikes in California are usually used for sports or a short bike ride by the beach.

Surprisingly, I have become a bike person myself - it is how I get to work! And the tram is so convenient and inexpensive - you pay 4 kunas (equivalent to 60 cents)  for a ticket that is valid for a 30min tram ride. That’ll get you to the square in Zagreb, which is quite beautiful.

Cafe culture! When I say there are cafes EVERYWHERE you go, I am NOT exaggerating. There are even cafes 3 feet from each other! When you think cafe, you probably assume they only serve coffee-based drinks, teas, frappuccinos- something along Starbucks, right? Well, you got it all wrong, honey! Want an alcoholic drink at 11 am? Zagreb has you covered. How about a coffee at midnight? Zagreb has you covered. Besides, Cafe culture is very laid back. This isn't an American Starbucks where you order something to-go or in the drive-through, because you are running late to work or school. Croatians like to enjoy their coffee with a cigarette in hand by lounging at cafes for hours with their friends- there is no such thing as being in a rush.

You will always see people at cafes no matter the time of day, especially late at night. This brings me to my next point: Croatians are night owls even during the week!

Not sure if this is an American thing, or I’m just getting old, but you will see cafes, parks, and sidewalks full of people late at night, no matter if it’s the weekend or not. Many people are out late at night, taking a stroll with the family, children are playing in the park, people are walking their dogs, and people are often walking to their destination. When I say late at night, I’m referring to 9-12 pm. Usually, in California, 9 pm means it’s time to get ready for bed because we have a 40 hour work week ahead of us. The only days we are out late at night are Friday and Saturday nights at bars or clubs.

What I’ve noticed about the food in Croatian grocery stores is the lack of variety, and this isn't necessarily a bad thing. In America, consumers are presented with an endless array of flavors in chips, candy, snacks, ice cream, cookies, drinks - the flavors and food options are endless. And let's not forget the frozen food products which take 3 minutes to heat up and eat instantly. This variety isn't something I’ve seen available at Interspar or Konzum, but I think this is great for a healthy lifestyle.

Also, bulk isn't a thing! So don't expect to buy two jugs of milk in a pack or two dozen eggs in a carton like you would at Costco!

Lastly, the women here are tall, thin, and beautiful. I would describe their fashion as chic, sophisticated, and even elegant, which is a significant contrast to California’s type of fashion. Because San Diego is sunny all year round (usually) and we live by the beach, so it’s common to see people wearing sandals, super short shorts, and crop tops. Everyday fashion staples I’ve observed Croatian women wear are leather jackets, jeans (high-waisted), long beige coats, long dresses, combat boots, and fashionable metallic colored sneakers. I am in love with their style and can't wait to shop for some of these things myself.

Is there something that surprised you while living here or was especially hard to get used to?

Yes. The power outlets are different! Back home, we have 2 or 3 prong power cords with narrow ends. Here in Croatia, the prongs are cylinder-shaped. We had to buy a converter to charge my laptop.

Did you know much about Croatia and Zagreb before moving here?

I did not know much about Croatia before coming here. The only reason I knew of Croatia was that my boyfriend moved here for work.

Was it hard to assimilate and meet new people and start friendships?

As I said, it is only my third week here, and I haven't had the chance yet to make friends with people, so I can’t say if that has been difficult. But I hope to make friends with my coworkers at the Croatian American Society. So far, assimilating in Croatia hasn't been too hard - yet.

What is your favorite thing about living in Zagreb? Do you have some favorite places to go in the city? If so, tell us which.

My favorite thing about living in Zagreb is my location. I live by Lake Jarun, so my boyfriend and I take long walks and enjoy the view. The tram is also within walking distance from my apartment, which is quite convenient for traveling throughout Zagreb. Did you learn to speak any Croatian in this short time?

I haven't learned Croatian yet, but I give my students 5 minutes at the end of class to teach me Croatian. So far, I know how to say hello/good day, goodnight, thank you, and excuse me. I also know some basic grocery food words like salt, sugar, and garlic.

Except for family and friends of course, what do you miss the most about your home country?

I miss my favorite local restaurants! I was always having weekend dinners with friends at my favorite sushi spot in Oceanside called Waraii Sushi and going on boba runs with my bff Rosmeri at TNL Boba Tea in Oceanside. Phil’s BBQ in San Marcos, Buffalo Wild Wings, and Chili’s are also my favorite restaurants I miss.

I also miss working 40 hours a week. People would probably read that sentence and think I’m crazy!  But I miss having a routine and earning money! I’m currently teaching English online and teaching English at the Croatian Academy part-time. I have too much free time, which may not be a bad thing for everyone, but I love being busy. I hope I'll get more hours at work to teach more classes. Can you maybe point out some general things about Zagrebians or Croatians?

Yes! Croatian men and women are tall compared to what you would see in California! Croatians seem very relaxed and are always drinking coffee. Oh! And I’ve noticed that a lot of Croatians enjoy smoking cigarettes. Back home, you will see non-smoking signs in public places, but here in Croatia, people are allowed to smoke pretty much anywhere (from what I’m aware of).

How much has your opinion of Croatia and Zagreb changed since living here?

I didn't expect everyone to speak English here. Whether at a basic or advanced level, people here know some English. I thought I was going to have a hard time communicating in English, and I’m glad it’s the opposite. They also like the same things Americans like. For example, listening to American music, going to movies, shopping, etc.

What are your plans for the future?

I am unsure about how long I will stay in Croatia. I predict until my rental contract is up, so in 4 months. My boyfriend will be here until May working, and I was originally planning to stay here until then, but I want to pursue my dreams of working for a company that provides ABA therapy services. I enjoy teaching English to adorable kids online and to Croatians, but my true passion is in ABA, so I hope to start graduate school for it in the fall of 2020.